EU is going to be among two or maybe three giants

In the middle of this century the world is going to have two o three giants, such as America, China or India, because they are large population countries, huge economy and huge military power. As argued some years ago by the British former Prime Minister, Tony Blair, these super powers are going to be much bigger and  more powerful than other smaller countries such as Brazil, Indonesia or South Africa. They are large population countries but not nearly as large as China or India. From a geopolitical point of view they are considered medium-sized countries.
In this world, if the medium-sized countries aren't banding togheter, the super powers above mentioned are going to sit on them. So if medium-sized countries were to join togheter, they would have some influence. But separately they are not going to be strong enough. Unfortunately, it's just a fact.
By saying that, we are not diminishing countries which are smaller than China or US. When countries like Germany, Spain or France are banding togheter in the EU, they are with a group of others. Consequently, they become able to operate as strong collective.
In this contest, each European country is part of the EU, which is the biggest political union in the world. How can we think that Britain or Italy are going to gain by giving up that relationship? Tony Blair defined it as an umbelievable act of self-denial. 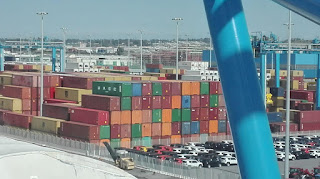 In a globalised world economy as above mentioned, how can British and Italian people think to go it alone? As soon as Britain leaves the EU, people in the UK will have no choice but to follow US policy, everywhere. Not to mention of loss of credibility and sovereignity.
Posted by Giorgio at 15:52

Giorgio
I was born in Naples, Italy, on March 26th, 1961 and since 1991 I've been living in Civitavecchia, 80 Km North from Rome. I got married in 1990 and have three children. Political science graduate, Master degree in environmental economics. At the moment, I'm working in the fields of environment and water pollution.